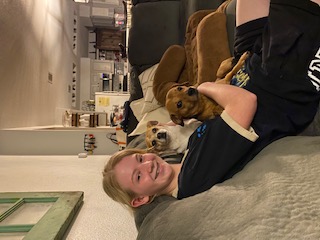 Handsome dachshund mix, Perry, was adopted last night! He decided that being a foster pet wasn’t good enough and convinced his fosters to make him a permanent part of the family. Now known as Finn, he has a canine best friend named Newt (Harry Potter fans may notice a trend in the family pet names!). Newt is a terrier mix and more high-energy than Finn (who’s quite chill for a doxie), but they get along very well, as evidenced by the attached pictures of their frequent snuggle-fests!